The Circuit Zandvoort in Zandvoort, North Holland in the Netherlands opened in August 1948. Following World War II, the plans in place pre-war resumed, and track construction began. Communication roads left by the Germans were utilized in the track design. The existing roads helped inform the overall layout, but a former Le Mans winner, Sammy Davis, was brought in as a design advisor and contributed to the process.

On the tracks opening day, the first race was the Zandvoort Grand Prix. The following year the race was renamed the Dutch Grand Prix.

In 1955, the Circuit Zandvoort hosted its first Formula One race following the formation of F! racing in 1950. The race was the fifth out of seven in the 1955 World Championship of Drivers. The Mercedes team carried the day with driver Juan Manuel Fangio achieving pole position and winning the full race.

A Grand Prix break occurred in 1956 and 1957 at the circuit, but it was then a fixture of the driving season until 1985. The race in the 39th Formula One season would be the last at the track in the 20th century. Driver Niki Lauda for team Marlboro McLaren International carried the race.

Development around the Zandvoort racetrack and concerns about the noise generated by races led to a plan to redesign a portion of the track. Management planned to take a southern portion of the track and move it in into the infield area. This would lessen community exposure to racing noise and received approval from the local council.

After the plans to resdesign the track were approved, the company running the track, CENAV, went bankrupt. A large portion of the track’s land was sold to the development company Vendorado. The company focused on bungalow park development.

StichtingExploitatie Circuit Park, an operating company, took a look at Circuit Zandvoort. By 1989, a full remodel was in progress. The company redesigned the track and made it shorter, limiting its ability to hold a Formula One race. Other motorsports were able to continue at the track, and it hosted Formula 3 races as well as the Deutsche Tourenwagen Masters.

The return of the Dutch Grand Prix is confirmed

After years of negotiations, remodels and behind-the-scenes efforts, Formula 1 CEO Chase Carey was able to announce in May 2019 that the Dutch Grand Prix was returning at Circuit Zandvoort. Some credit the increased dedication to the effort on both the part of F1 racing and Zandvoort officials to Dutch Red Bull driver Max Verstappen whose popularity on the track was surging at the time. This remains the case following a 2021 World Championship win. The original agreement was for hosting the race for at least three years with an option for two more years. Despite previously refraining from using public funds, the local municipality invested four million Euros in infrastructure improvements leading to the track.

In August 2019, the racing schedule unveiled the 2020 Dutch Grand Prix would be the fifth race on the 2020 schedule. It was scheduled for May 3, 2020 with China and Spain on either side.

COVID-19 led to race cancelations and rescheduling across the Formula 1 calendar, and the Dutch Grand Prix was no exception. Following adjustments to other races and postponements, organizers announced the cancelation of the race on May 28, 2020. The organizers advised that after decades of waiting for the return of Formula 1 to Zandvoort, it was important to wait to enjoy the first race with the presence of anxious racing fans. Fans who purchased tickets for the 2020 race were able to use them in 2021 or receive refunds.

The 2021 Dutch Grand Prix was able to move forward as planned at Circuit Zandvoortwith a two-third capacity crowd in attendance due to ongoing COVID-19 concerns. It was the first Dutch Grand Prix in 36 years and the 13th race of the 2021 calendar. Max Verstappen for the Red Bull Racing – Honda team was able to claim the win – the first by a Dutch driver in his home country. 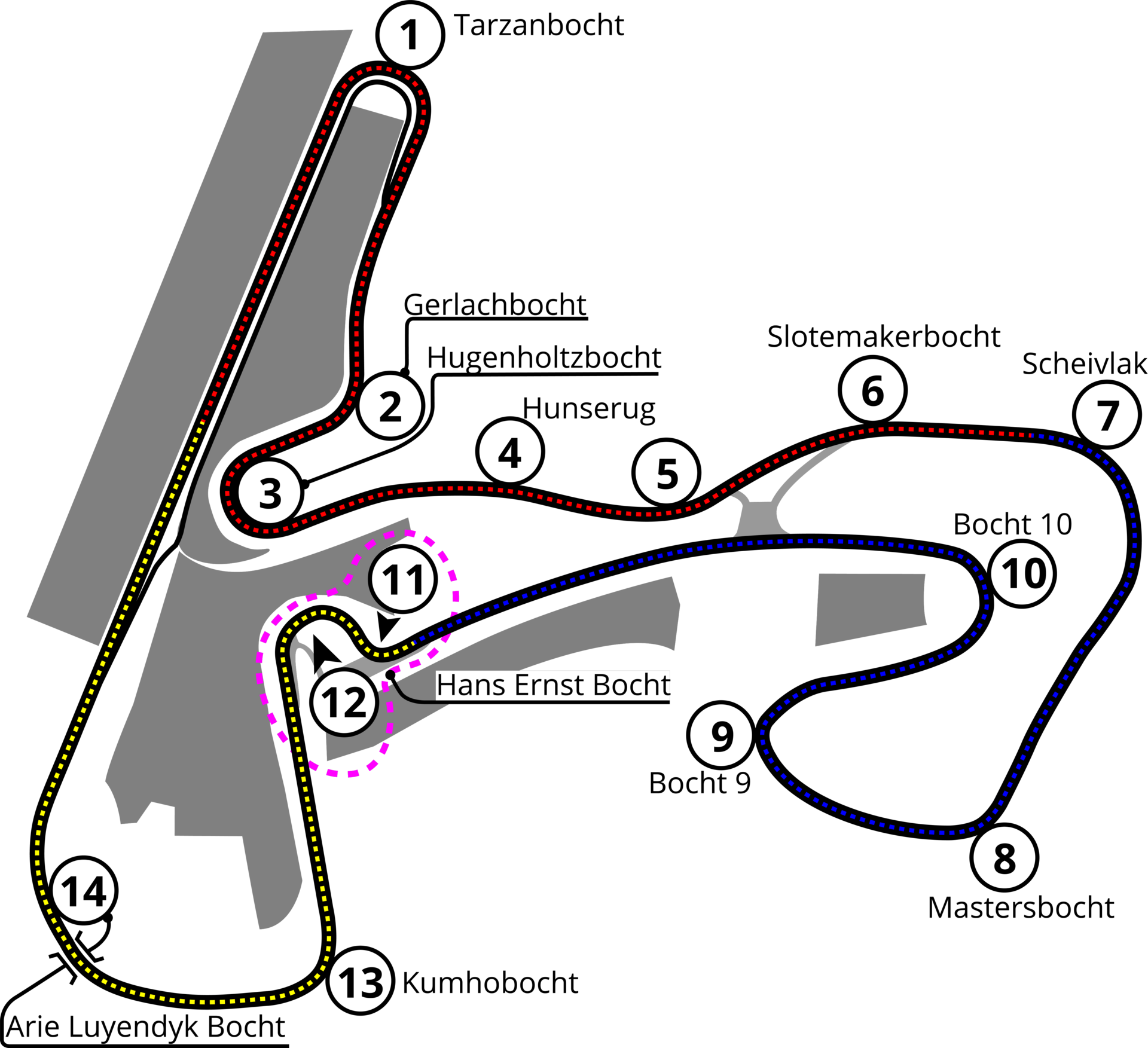 With the first Formula 1 race in decades held in 2021, new records were made on the updated circuit layout. Lewis Hamilton set the lap record at 1:11.097 while Max Verstappen set the all-time track record at 1:08:.885 during qualifying the day before. All other track records are from other race classes.